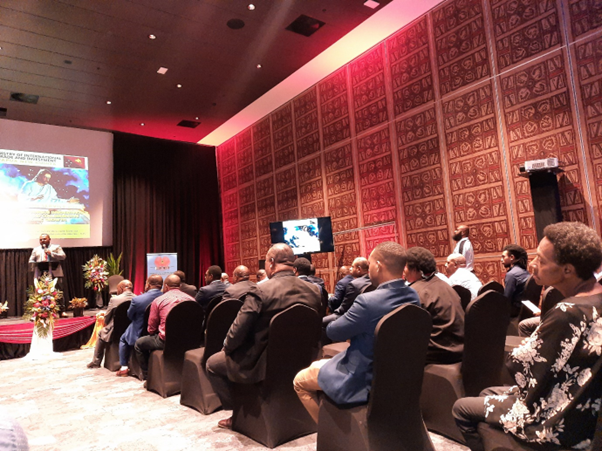 The Securities Commission of Papua New Guinea joined its peer agencies under the helm of the Ministry of International Trade and Investments had a combined dedication service held recently at the APEC Haus in Port Moresby.
Minister for International Trade and Investment, Hon. Richard Maru in his welcome remarks challenged the staff in his ministry to be committed to their jobs and to deliver and maintain high standards of conduct to be inclusively innovative to serve with honestly.
Minister Maru pointed out that the key economic indicators are not favorable, and we (GOPNG) are expected to double the size of our GDP to K200 billion in the next 5 years. “Our GDP is about K105 billion, and we are expected to double the size of our GDP to beyond K200 billion in terms of internal revenue.
He said that the country currently needs a national budget of K25 billion to run smoothly and that the government is still borrowing funds to keep the economy stable.
“As long as we are borrowing, we are not financially independent because we don’t have the resources, so we have to borrow.
“If we are going to double the size of our economy from K19 billion to beyond K30 billion, we would no longer need to borrow.
“Our (GOPNG) mission is clear, by the year 2032 this country will not need to borrow we must raise internal revenue of over K30 billion,” Minister Maru stated.
Minister Maru also said that the ministry was created to be the main driver to provide leadership and oversight to grow the economy of Papua New Guinea.
He stressed more on the economic factors of land, labour, capital and entrepreneurship and said that there needs to be more activity in these areas.
“We don’t even have the capital, we need money from investors, our capital market is so small we can’t even raise the capital domestically.”
One of the objectives of the government with the establishment of the new ministry is to diversify and process resources within the country therefore increasing internal revenue.
/////////////////////////ENDS/////////////////////SCPNGSCPNG Securities Commission of Papua New Guinea MEDIA/////////////////////////////////////////////